This short guide describes VG 2D-data import dialog of KolXPD and the procedure of importing 2D data measured by VG-Scienta electron energy analyzer. The 2D data file contains intensities of detected electrons as a function of kinetic energy (1.dimension) and emission angle or position on the sample surface (2. dimension). The VG 2D-data import dialog is used to import a set of 2D data that were acquired by scanning 3. dimension (for instance azimuthal angle in case of XPD measurement, or position on the sample surface perpendicular to the 2. dimension in case of XPS mapping). This manual is describing the import on an example, in which an XPD measurement was performed.

2. Choose 2D data to be imported

Using button Load 2D detector waves... choose the files with 2D data to be imported. The chosen files are listed under the Load button (Fig.3, Frame 1).
Dimensions of each 2D data file are displayed before the titles of the files. Those numbers must be same for all the chosen files. The sum of the loaded data is displayed in the main graph window (Fig. 3, Frame 2). Data from only one file can be displayed by selecting the file in the list. The graph window displays data integrated over the x-channel range on the right and over the Y-channel range at the bottom of the graph.

Some of the region settings are loaded from the first file in the list. They define the region title and energy scale. Ek-axis start defines the kinetic energy at the beginning of the measured region, Ek-axis step defines the energy step which was used in the measurement. The option Binding energy will display imported data measured in kinetic energies in binding energies. An appropriate kinetic energy of Fermi edge is supposed to be filled in simultaneously.

A shift in energy scale for each Y-channel can be corrected in the same way as it was described in 4.1 (Fig. 4c).

Fig. 4a. As measured

Fig. 4b. After intensity normalization 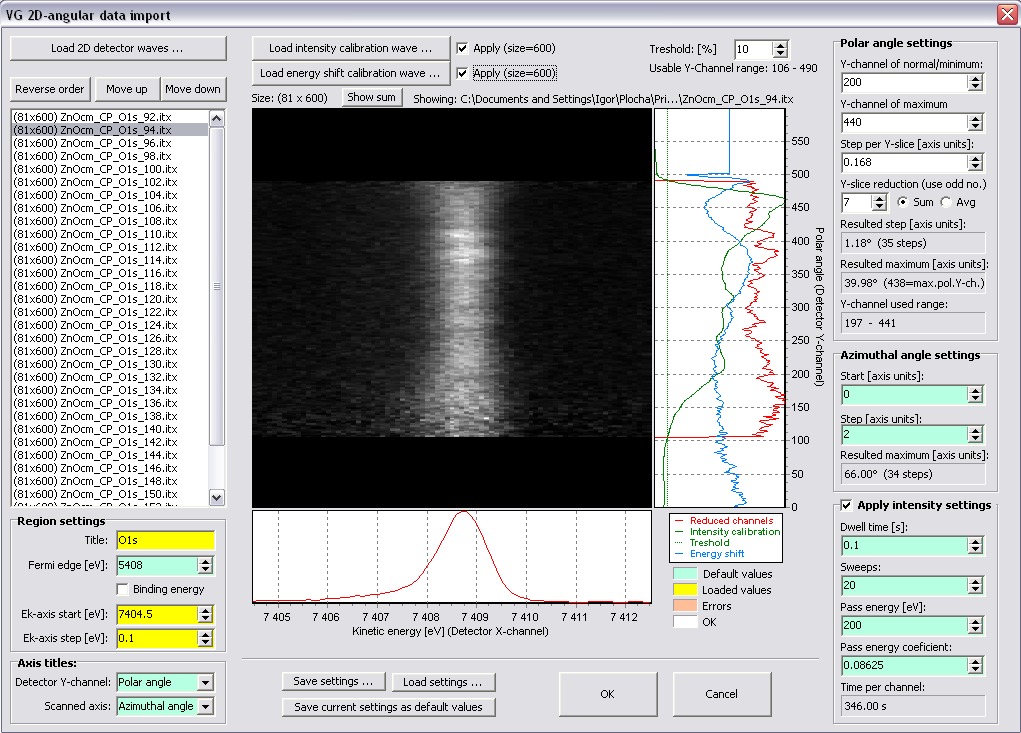 In dependence on the type of measurement, fill in the titles of axis that are represented by Y-channels (Polar emission angle in this example) and by scanned dimension represented by the loaded files (here: Azimuthal angle, Fig. 5, Frame 4)

In this example, polar angle was chosen for the Y-channel axis, so Polar angle settings are going to be set (Fig. 5, Frame 5).

By setting Y-channel minimum and Y-channel maximum, the range of Y-channels that are going to be imported is chosen. The data stored in channels out of the range are not taken into account. The true range depends on Y-slice reduction and is displayed under the Y-channel used range label. By setting Y-slice reduction, one can average or sum up several Y-slices into one and increase the signal/noise ratio, thus.

The size of step (S, Resulted step) is defined as:

where p is Step per Y-slice and r represents Y-slice reduction.

The Resulted maximum M is equal to:

where n is the number of steps in Y-channel scale, which is equal to Y-channel used range divided by Y-slice reduction.

By selecting this option, the intensities detected in counts will be divided by total Time per channel and thus transformed into counts per second. The used formula for the Time per channel is:

where E is the pass energy in eV, s the step in energy scale in eV (defined in Region settings), d dwell (step) time in seconds, N number of sweeps. Constant k is the factor of proportionality which together with the pass energy E determines the energy range of the detector of the analyzer. In order to get the value of k, consult the manual or provider of your analyzer.

The chosen data files will be finally imported into KolXPD by clicking OK button.

Always check whether there are not red-colored items in the import dialog. The red color indicates a wrong parameter (our of range, mismatch between the dimensions in data files, …). Fill in the correct values in the red-colored items and then click OK button.

All the settings can be saved and loaded (Fig. 5, Frame 8) and the used settings are written in notes after the import.

If you need more information or looking for specific solution or product, contact us!